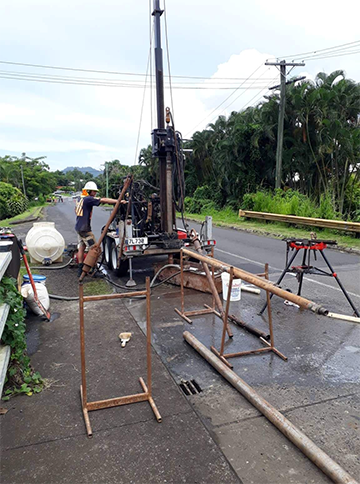 As a Small Island Developing State (SIDS) in the Pacific, Samoa has been heavily impacted by increasingly severe tropical storms. Given the topography of the country, these extreme events have caused significant river discharge that result in flooding of lowland areas. On December 13, 2012, Tropical Cyclone Evan (TCE), considered to be the worst to impact Samoa since Cyclone Val in 1991, made a landfall at 2 pm, causing widespread havoc and damage across the country from maximum sustained winds up to 167 km/h (90 knots), heavy rainfall and flash floods. TCE lasted for two days resulting in the loss of five lives and about 4,800 people temporarily displaced from their homes.

In December 2016, Government of Samoa received financing from the Green Climate Fund to undertake the Integrated Flood Management to Enhance Climate Resilience of the Vaisigano River Catchment in Samoa project. The objective of this project is to strengthen the adaptive capacity, and reduced exposure to extreme weather events, of vulnerable communities, infrastructure, and the built environment in the Vaisigano River Catchment area. The project represents the Government of Samoa’s initial steps in operationalizing a comprehensive flood management solution. It has three major outputs: