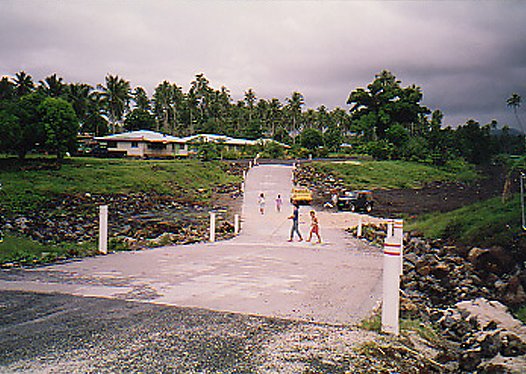 The primary objective of this project is to replace the existing ford in Samalae’ulu with a bridge. This project is funded by the World Bank under the ERAP Programme which was initiated following Cyclone Evans in 2012 that caused major flooding around the area.

The Authority issued a request for proposal for the Design and Environment Assessment of the bridge in 2016, and the project was awarded to Soosung Engineering in association with KEW Consultant Ltd. Following the completion of the design and environment assessment the Authority then issued a request for the construction of the proposed project and was awarded to Ah Liki Contractors. The timeframe for the works is scheduled to be completed by early 2020.

The bridge will be located at the west T-intersection of the main road south of Samalae’ulu. The concrete bridge will have a travelled proportion (top surface) proposed to be 30 meters in length and will have a 22.0m length elevated road extension situated on concrete footings  immediately adjacent to it. The span between bridge abutments is proposed to be 22.0m.

It is expected that upon successful completion of this project, this bridge will provide easier and uninterrupted access for the public especially during cyclone seasons as the current ford is usually closed off to the public for safety precautions.